It finally happened: I told a stranger to shut-up on Facebook.

It happened in a private forum created to share resources to combat teenage depression. I found a particular link this person posted to be irrelevant, negative, and controversial and asked, as politely as I could, that we stay focused on the shared goal. And then I got attacked. Not just from the original poster but from three or four additional strangers.

Now I had a second problem: they weren’t only negative, they were WRONG too! The more I tried to tell them, the worse it got. I’d be crafting a response to a response when two or more new responses would appear out of thin air, like incoming space ships in Galaga or Space Invaders! Eventually, I realized the conversation was a dead-end, but not before I lost both time and face.

Here’s the part that bugged me the most: by pointing out their negativity, I became increasingly negative in turn. Which made me wonder: does negativity necessarily breed negativity? If so, are we all vulnerable to an eventual world takeover, not by the Russians or Chinese, but by negative people???

Fear not. After careful scientific analysis, I have come to the conclusion that negative people are of no matter to us: they’re all bark with no bite. Nor will they ever rule the world. And I can prove it. 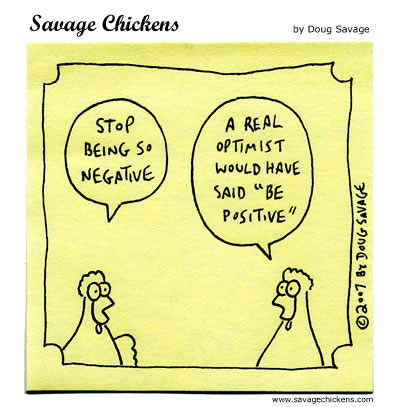 Step 1: Establish Language as Our Modality

First, let’s agree that the language we use matters. Often, one word can make all the difference. For instance, how many times have you wanted to call someone an asshole but remained silent instead?

Language is also highly relevant because negative people tend to have a negative dialect. They use negative directives like ‘stop’ and ‘don’t’ instead of proposing productive alternatives. They add extra words to phrases to make an innocuous, heartfelt inquiry like “What’s the matter?” spawn a more violent cousin: “What’s the matter with you?!” And they use absolute modifiers (never, always) in direct opposition to each other so that when they say something like ‘Absolutely Not!’ I feel like someone just played ‘psych!’ on the part of my brain that processes language.

I’m starting to get myself worked up again! Okay, deep breath. Let’s pause for some humor to lighten the mood:

Q: How many pessimists does it take to change a light bulb?

A: None, the new bulb probably won’t work anyway. Plus, whoever put in the old bulb screwed it in too tight!

Ready for another? How about the one about the glass being half-full or half-empty? We already know that an optimist will call it half-full while a pessimist insists it’s half-empty, but did you know that…

Are you more relaxed? Me too! But now it’s time to leave humor behind. Because while it totally releases tension, it doesn’t actually rid us of negativity. In fact, as irony and meta humor increase in popularity, humor can actually propagate and perpetuate negativity. Take the bumper sticker that reads “Mean People Suck!” It’s funny, right? Of course it is! But it’s also negative. Why not a bumper sticker that reads, “I ♥ Nice People” instead? I might as well keep stuffed animals on my dashboard – i.e., it’s not cool. 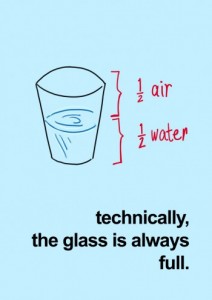 So fine, let’s let humor serve it’s purpose and move on to another way of thinking.

How about science? Geeks are totally hip and current right now! Let’s use science to change the paradigm. How would a science-minded individual approach the question of the half-full/half-empty glass? Easy. Without hesitation, they would tell you that the glass was full the whole time: 1/2 with water, and 1/2 with air.

Makes me wonder why we spent so much time contemplating the question in the first place. I think it’s to point out the optimist will tend to focus on the tangible and the pessimist the intangible.

Alas, and without further ado, my own graphic!

Get it? Negative people can continue to point out the void in anything they want but until they begin focusing on things with matter, they don’t matter.

Mind you, I still want to throttle people who consistently make negative comments on Facebook. But why bother? Without negativity, we wouldn’t be here in the first place. The universe itself was created by the  cosmic smackdown between matter and it’s opposite, antimatter, 13.8 billion years ago during the Big Bang. The good news, however, is that for every billion particles of antimatter in the Big Bang, there were a billion+1 particles of matter – i.e., matter already won the war for us. So don’t become collateral damage; Just ignore negative people and move on.

Step #4 End by Making Yet Another Random Language Association, This Time Using  Etymology

As if my air-tight logic isn’t enough, I’ll give you one more reason to listen to me. Turns out that the word “matter” comes from the Latin root word “mater,” which means mother. That’s right, kids. You have to listen to me because I’m a mother and I SAID SO!