It’s that time of year again—time for my kids to study weight and measurement in math class. Oddly, I have mixed emotions about it this year. On the one hand, I am so done with 4th grade long division and talking my daughter down off the ledge. On the other hand, all the inches-that and quarts-this is making me wonder why the USA, the self-professed leader of the free world, continues to cling so tightly to the imperial system when it’s obvious that another system has clearly taken over the entire planet:

You thought I was going to say metric, didn’t you? I get it. After all, there are 10 types of people in this world: those who understand binary and those who don’t…ba-dum-BUM!

I think we’re getting a little too carried away with our 1’s and 0’s. I mean, yes, the binary system underlies the entire foundation of digital computing, but when did that become to mean that we ourselves, the human counterparts to computers, have to start thinking exclusively in binary terms? Right or wrong, true or false, win or lost, black or white, do or die, all or nothing, paper or plastic, coke or pepsi…enough!

Here’s another example: Venn Diagrams. Do you remember these from school, the diagrams that use circles to highlight common elements of disparate items? I love me a good Venn diagram—I even made an ironic one below for your amusement—but as they become increasingly ubiquitous, so ubiquitous that even Seth Meyers did a comedy bit about them on his new late night talk show, they are mistakenly thought only to allow two circles. Not true; you can work your way up to three, four, five, etc. 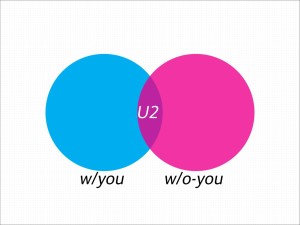 Why do I care so much?

Because I’m worried that my kids are internalizing this message, that they will mistakenly believe that there are only two ways to see the world, two sides to a story, or two who can play that game. And I’m terrified that when they get to high school, they will be so used to this type of thinking that when they become stressed beyond their mental capacity, which they will because the rigors of modern life are too much for the average teenage brain, it will become a question of life or death. Over the most recent weeks and years, my local community knows all too well how this scenario can play out.

I, for one, want to remind my daughters that when all seems lost, it’s not. There are always (always!) more than two choices, two circles; And that if they don’t like circles, they can try triangles; And that if neither circles or triangles work for them, I’ll help them find a new metaphor altogether. The point is that life is not binary. There’s almost an infinite number of decimal places between zero and one alone. Surely we can help our kids trust and learn to look for more than one or two solutions to any problem.

By the way, something magical happens when you begin adding more and more circles to a Venn diagram. It begins to look like the seed or flower of life, an ancient symbol found in most major religions around the world. The seed of life is also a popular mandala, a type of circular diagram that Buddhists draw in meditation as a reminder of our relationship to each other and to infinity. I only know this because mandala coloring books are now marketed to suburbanites like myself who color them for stress-relief.

I’m not saying that coloring this and other mandalas with your children can save the world, but it can’t hurt either. 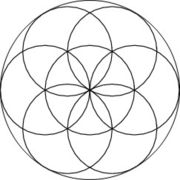 3 thoughts on “The Circle(s) of Life”