I’ve been obsessed with erasure for a while now.

No, I don’t mean the insanely awesome, ’80s Europop sensation, worthy-of-their-own-post, Erasure (though I fully admit to seeding more than one Pandora channel to A Little Respect and Oh L’Amour), but a form of poetry in which poems are created by cherry-picking words from an existing source of published text and, you guessed it, erasing the rest.

It started in 2010, when I bought Jonathan Safran Foer’s book, Tree of Codes, a die-cut erasure of the book, The Street of Crocodiles. The book is so beautiful and fragile that I have yet to read it. Then, in 2012 I discovered Mattea Harvey’s Of Lamb, in which she and illustrator Amy Jean Porter created an irreverent version of Mary Had a Little Lamb by performing erasure on an old biography of Charles Lamb that, if I recall correctly, Harvey found in a bargain bin. I did read this one, and it was awesome.

Finally, forming a perfect trifecta of erasure masters, I turned to Austin Kleon, who, using only a black Sharpie marker, attacks print newspapers to create Newspaper Blackouts. The result is a brilliant and artful counterpoint to redacted documents, the fastest growing visual of our time. In fact, it is that very comparison that gave me the idea for this post. Because while Kleon came up with newspaper blackouts to find more words, I’m hoping to use them to help me lose words.

In short, I have too many words that can get me into trouble.

I have handwritten words bursting out of shelf-fulls of abandoned journals, gigabytes of digitized words laying in wait as 0s and 1s on my hard drive, and pages and pages of inky words printed out on  8 1/2″ X 11″ paper, then stuffed hastily into manila folders. Someday, if I’m not more careful, my daughters will find these words. And like a mouse with a cookie, they will read these words. And when they read these words, they will want an explanation.

How will I explain away the words I used to describe the mind-numbing monotony of staying home, my envy of childless women who have time to write novels, or my negative feelings towards cats before we had any of our own? How will I make them understand that 99% of what I write represents nothing more than fleeting flashes of electrical currents in my prefrontal cortex that become immediately out of date, out of sync, and out of context the second I commit them to paper?

I don’t want my daughters to misinterpret or misconstrue any words or string of words I’ve created over the past decade. Regardless of how the words may or may not read, being their mother is the single best thing I’ve ever done. I could stop writing altogether, but some days, banging out words on a keyboard is the only thing standing between me and sheer madness. So, using Austin Kleon’s newspaper blackouts as inspiration, I’m going to approach the problem a different way.

First, let’s flip the numbers. If 99% of everything I’ve ever written (in journals, unfinished drafts and published pieces), is either a) crap, b) no longer relevant, or c) written by an earlier version of myself I no longer recognize, there is still a solid 1% left that must have lasting truth. And just like a redacted document can often save a politician’s ass, maybe a newspaper blackout can save mine.

Alas, one of my published pieces erased down to its 1% of pure truth. I could have chosen any piece and found the same sentiment because five short words is all I need to tell my daughters all they need to know: 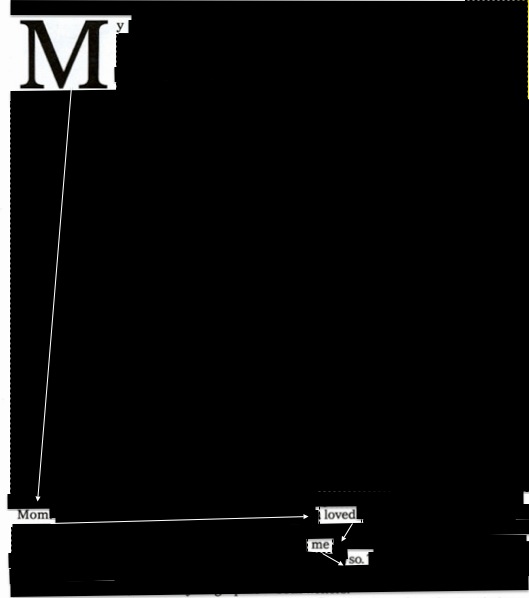 Postscript (January 2015): Here’s another great example of erasure – this time by using the Apple Terms & Conditions by Jessica Mullen.

8 thoughts on “Erasing My Way Out of a Pickle”