A few years ago, my twin sister called to tell me that she met someone I used to work with.

“You’ll never guess who I met last night!” she exclaimed. “Do you remember a Scott Larson?”

Of course I remembered a Scott Larson. Except in my mind he was “the” Scott Larson. UVA grad Scott; rugged, I-like-to-rock-climb Scott. He and I had worked together in an office full of cave-dwelling Internet developers. He had stood out simply for showing his face during daylight hours and speaking in complete, coherent sentences. I hadn’t seen Scott since the Internet bubble burst and I decided to stay home with my first child.

“Yeah, and he totally remembered you!”

I immediately chucked aside my thinly veiled female pride. “Really? He did? What did he say?!”

I waited in unabashed anticipation for Scott Larson’s words to bring my former self back to me: the one who once had a promising career, was valued for her intellect and who wasn’t covered in spit up. 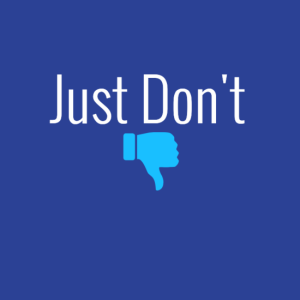 “Oh, you know – he wanted to know what you were up to, whether you were working or just a mom now…”

Awkward pause. “Um, yeah? But I’m sure he didn’t mean it that way! He’s just a guy, remember?”

There it was again: that word.

Right then and there, I identified the root of the problem. It wasn’t Scott’s implied editorial, deliberate or not, or my sister’s instinct to protect me by belittling his credibility. It was the word itself! How different our conversation would have been had he asked her instead: “Is she enjoying staying at home?” or “How is she taking to motherhood?” But he didn’t. So I decided then and there to hold a grudge against the word ‘just.’ I developed a sixth sense for spying it in print, secretly judged others for using it, and downright condemned those who over-used it.

But it took more energy than I expected. The word is one of the most used words in the English language. Its popularity ranks right above “very” and only slightly behind “more.” In addition, women tend to use the word twice as much as men. I’d also be lying if I said I didn’t sometimes accidentally use the word myself, like when my young daughters lap up to me and beg me to play with them. “Sure sweetie,” I say. “Be there in just a minute!” At three and five years old, even they know a stall tactic when they hear one.

Over time, it became clear that my hatred for a single word could not be absolute. Several appropriate, even enriching, uses of the word began coming to mind, like Nike’s ‘Just Do It’ or Stevie Wonder’s classic, “I Just Called To Say I Love You.” I also remembered how the word has at times warmed my heart, like when my grandmother’s strong hands guided mine to complete my first purl stitch. “Just so” she said in her thick Italian accent.

In the end, I have decided to limit my strong disdain of the word to specific intents, such as the word’s ability to help one cower (“I just thought that…”), to avoid confrontation (“just checking to see if you’re finished yet”), or to fake modesty (“What, this? It’s just a little something I whipped up.”)

And Scott Larson’s intent, of course. “Is she ‘just’ a mom?”