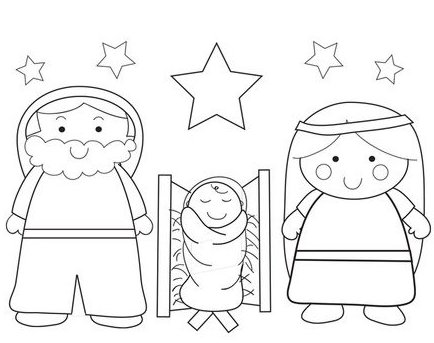 “Oh my gosh!” I cried to my almost four-year old daughter as we drove around suburbia one December day. “This used to be my favorite Christmas song when I was your age!”

I was giddy. I hadn’t heard Happy Birthday Jesus! play on radio airwaves for decades.

My daughter clapped her hands together in happy solidarity, and leaned forward in her car seat to hear better.

The song, a happy little ditty written and performed by talk show legend Mike Douglas, is today fairly obscure. But in simpler times, the late 1970s, it used to air regularly on the J.P. McCarthy show on WJR 560AM in Detroit, the de facto soundtrack to my childhood. Hearing it that day in the car with my first-born transported me to my mother’s kitchen, with it’s avocado-colored appliances and orange and brown wallpaper. I would slurp cereal at the kitchen table. swing my feet to the beat and pray to baby Jesus that the Romper Room lady might finally see me through her magic mirror that day.

As the song faded to commercial, my daughter started thumping on the back of my seat.

Startled, my heart began to beat faster as my brain struggled to cut through the fog of childhood memories. “What? What is it?!”

“Baby Jesus is one!”

I took a deep breath, “Is one what, sweetheart?” I asked, readying myself up for another conversation in which my sole purpose would be to decode some highly unexpected association between Jesus and whatever TV show she watched that morning. Higglytown Heroes, perhaps?

“One year! Jesus is one year! The barn animals will be so happy.”

I peeked at her in the rear-view mirror of my minivan as we drove around Northern Virginia, a community of many faiths and no faith at the same time. She looked punch-drunk with love.

It is important to note here that yes, my daughter clearly understood the religious underpinning of Christmas—that it’s the celebration of the birth of Christ. And while she was technically Catholic, according to both birthright and some ceremonious holy water dripped on her when she was a few months old, she had so far been raised without religion. In other words, her only frame of reference for the Christmas story at that juncture was a children’s board book titled Who is Coming to Our House?

It was my daughter’s favorite bedtime story the year before. My mom, her grandmother, a devout, taught-by-nuns, carries-holy-water-in-her-purse Catholic, had given it to her. For weeks on end, my daughter would climb into my lap at bedtime, turn the thick cardboard pages with her chubby fingers, and fall more and more in love with the friendly-looking barn animals who spoke in rhyme as they prepared for a special visitor. (Spoiler alert: it’s baby Jesus.)

Now, an entire year later, she was returning to that story, which I now realized failed to state a specific year. 1 BC or 2006—who could say? As hilarious as it seemed to me at first, the idea that baby Jesus could be born in the millennium, I couldn’t help marvel at her ability to carry a concept forward and apply it appropriately some 365 days later. If baby Jesus had in fact been born last year, he most certainly would be celebrating a first birthday.

Alas, Mensa would have to wait. My obligation right then was to fill her in on the historical context of the holiday and more importantly, to set the groundwork for her future understanding of Christianity.

I heard a soft, animal-like yelp escape my daughter’s mouth, a sound I now know was her innocence, and stole another look through the rear-view mirror. Head hung low, she began crying big, wet tears into cupped hands. Was it wrong to see a resemblance to the Virgin Mary?

I immediately went into crisis mode and backpedaled, explaining in a soft, soothing voice that Jesus was a grown-up when he died, that it all happened a very, very long time ago in a place called History, and that we celebrate Christmas to honor his life, not his death. I did not, for the record, share with her that Jesus wasn’t technically born on December 25th, that Christmas trees are a pagan holdover, or that barn animals can’t actually talk. Or rhyme.

A minute that lasted an eternity later, she lifted her blonde-bobbed head to to speak. I held my breath.

“Mary and Joseph!” she whispered. “They must be so sad!” And she wailed some more.

Inwardly, I was annoyed at myself for not bringing her to church sooner. Not because I felt like I had robbed her of some innate right but that because if I had, someone else, presumably with more finesse, would have prevented this moment from ever happening, and I wouldn’t be stuck having our first ecclesiastical conversation in a minivan.

The other feeling washing over me was pride. Without the structure of organized religion, namely the confusing dogma of my own Catholic faith, my almost four-year-old daughter was crying out of empathy and compassion for people she knew only from the pages of a book. Her heart was full of love and kindness, and without the aid of weekly Mass, she was learning to recognize the inexorable pain of the human condition alongside the unrelenting mystery of religion. I couldn’t teach her that if I had tried.

In that moment, she embarked on her own journey. So before I could change my mind, I reached back behind me, handed her a tissue to wipe her tears, and ripped off the rest of the band-aid.

“Don’t worry, sweetheart,” I said. “Joseph and Mary are dead too.”