Disclaimer: this is a ‘mock’ article, as in totally fabricated, as in not true, as in just for fun… ;) 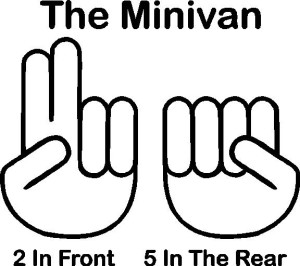 FAIRFAX, VA — MomRide, based in Fairfax, VA, announced another profitable quarter as its app-based ride-share service continues to dominate the market in the Northern Virginia suburbs. Though similar to Uber and Lyft in business model, MomRide set itself apart from the very beginning by employing only one type of driver: stay-at-home moms.

Founder Marla Mater got the idea while driving her kids to and from summer day camps last year. “By the time I’d drop the last child off, I’d have maybe an hour before it was time to begin picking them back up. Instead of driving home, I’d sit in a Starbucks parking lost listening to NPR and playing Candy Crush on my smartphone. One day, I heard a story about Uber’s business and had a eureka moment!”

Six months later, Mater launched her service with a backlog of moms wanting to drive for her company. “The flexibility is perfect for our drivers,” says Mater. Stay-at-home mom Nancy Limoux agrees. “I drop my kids off at school, pick up a couple of rides, and am still on time for my afternoon Pilates class!”

Other moms cite the opportunity to make money as a top motivator for becoming a MomRide driver, while some seem smugly self-satisfied at the opportunity to utilize the empty seats of their gas-guzzling machines. Still others cited the need to offset the existential loneliness of fulfilling a thankless task that until now has had no redeeming economic value. One mom, Linda Needlander, has found such validation in her work with MomRide that she now makes her children find their own rides to activities so she can log more hours behind the wheel with paying, and more importantly, appreciative customers.

Whatever the motivations of MomRide’s drivers, riders are signing up in droves. Paul Nesser, at first a skeptic, says he was turned around after one one ride. “My driver knew the back routes better than any taxi driver I’ve ever had. Plus, she instantly diagnosed the annoying rash I’ve had for weeks, gave me pointers on my sales pitch, and helped me reconcile my latent oedipal complex.”

Other gush about the unexpected comfort of minivans.“I used to have to fold into the back of an UberX Prius. Now I can stretch out my feet in the middle aisle!” says Martin Dexter, a six foot three adult male. Though minivans are the most common type of vehicle in MomRide’s fleet, some riders can also expect to be picked up in SUVs with three rows, or as they are known in the business, too-cool-for-a-minivan minivan.

Riders are also treated to a snack service. Specifically, they can choose from a large array of healthy pre-packaged snacks, such as Goldfish crackers, yogurt tubes and boxes of raisins, though some moms go out of their way to show up their fellow mom drivers by offering homemade goodies, such as granola or Kale chips. Riders are encouraged, vis-a-vis MomRide’s mobile app, to mention any special dietary needs, such as gluten or dairy allergies. Sensitivities may also be noted, though depending upon the mom, these may or may not be recognized as valid dietary constraints.

MomRide isn’t stopping at superior experience, either. They are also banking on having the best app and technology infrastructure behind their service. Though MomRide would not confirm, it has been rumored that the leading-edge app was single-handedly architected by the owner’s son, a twelve year old computing phenom who tired of Minecraft and needed a bigger challenge.

As of this printing, negative reviews have been minimal. One rider recalls being put into a time out during one ride upon refusing to put her smartphone away while another bristled at the driver’s presumptuous tone that she might want to ‘cover up.’ Both seem to be fairly isolated events, and coincidentally logged by riders named “Brittany.”

Though most analysts are optimistic about the company’s future, one reporter, Jack Ashoff, has been quite outspoken about his dislike for the company. “It’s a well-known fact that broads can’t drive. Besides, women are infamous for getting pregnant and leaving the workforce.”

Unless and until pregnant women are banned from driving, Mater sees only blue skies ahead. She hopes to expand the company’s service to additional metropolitan areas by the end of the year, as well as look for other ways to help moms capitalize on daily mundane tasks, such as laundry, grocery shopping, and flushing toilets.

4 thoughts on “Cashing in on Carpooling, MomRide Laps the Competition…”